Give Kids The World Earns Top Rating from Charity Navigator

When you donate to a charity, it’s important to know how your money is being used. At Give Kids The World Village, we work hard to make the most out of every dollar donated and to be transparent about where contributions are going.

That’s why we’re excited to announce that for the 13th consecutive year, we’ve received a four-star rating – the highest possible –from Charity Navigator, the nation’s leading independent evaluator of charities.

With more than 92 cents of every dollar going directly to our mission, we’re part of the less than 1% of charities to receive this rating 13 years in a row.

For Dr. Jonathan Colter, getting involved with Give Kids The World Village began with Charity Navigator.

“I was searching for a children’s charity to support and Charity Navigator listed Give Kids The World,” said Dr. Colter, retired chiropractic physician from Huntersville, North Carolina. “As I went through the scores, the Village website and reviews, the mission became incredibly meaningful to me.”

Dr. Colter has been involved with Give Kids The World since 2012. He participated in our inaugural Over The Edge event, raising more than $7,000 dollars to become the event’s second highest fundraiser!

“It seemed like a novel way to get involved,” he said. “I was able to participate and show my dedication for Give Kids The World’s mission.” 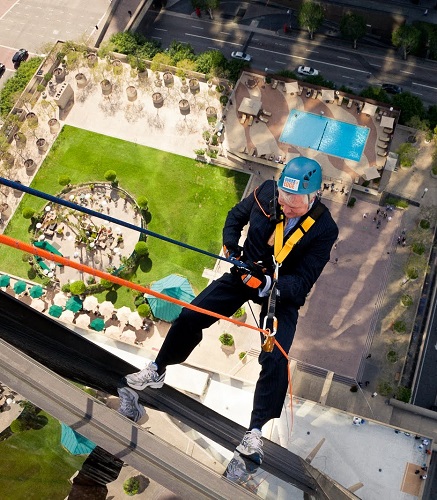 After the event, Dr. Colter toured the Village, getting a look behind the four-star rating. Through Charity Navigator and his passion for our mission, he became an important member of our Village family.

For dedicated individuals like Dr. Colter, Charity Navigator provides peace of mind. Our consistent rating and scores are a reflection of our commitment to our children and families and to our generous supporters. We’re incredibly gratified for this recognition and look forward to working hard each and every day to ensure that contributions are used in the most efficient – and transparent – way possible.