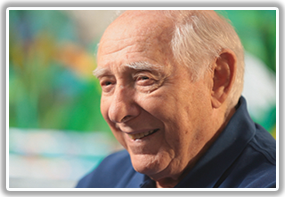 Like the special children Give Kids The World Village serves, its founder, Henri Landwirth, a holocaust survivor, knew all too well what it was like to give up childhood. Born in Antwerp, Belgium, on March 7, 1927, Henri and his family were separated and became prisoners in the Nazi death and labor camps during World War II. Henri spent the years between the ages of 13 and 18 in camps, including Auschwitz and Mauthausen. By war’s end, both of his parents had been killed but, miraculously, Henri and his twin sister, Margot, survived and were reunited.

Henri worked his way to America on a freight ship, arriving in New York City with $20 in his pocket and little knowledge of the English language. Soon after, he was drafted to serve in the Army. Henri used his GI benefits to learn hotel management and landed a position in a hotel, taking every opportunity to learn each job in the industry. This first job became a lifelong career.

Landwirth moved to Florida in 1954 and began to manage the 100-room Starlight Motel in Cocoa Beach, near Cape Canaveral. Space exploration was in its early days and the original Mercury 7 astronauts and newsmen covering their adventures made the Starlight their temporary residence. It was during this time that Henri forged lasting friendships with the astronauts and newsmen, including the late Senator John Glenn and the late Walter Cronkite. 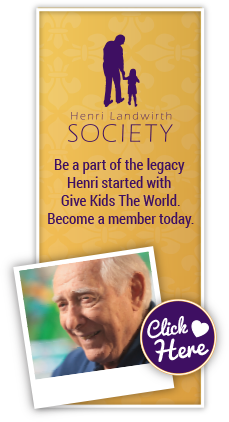 A Lifetime of Giving

Since his retirement from a successful, innovative hotel industry career, Henri has devoted himself to improving the lives of those in need through numerous foundations and nonprofit organizations he has founded in addition to Give Kids The World.

With the original astronauts, Henri founded the Mercury Seven Foundation, now known as the Astronaut Scholarship Foundation, which provides scholarships to promising young science students. Through the Fanny Landwirth Foundation, named for his mother, he built a senior citizen center, a children’s school in Orlando, and created a scholarship program for underprivileged children in Israel.

In 2000, Henri founded Dignity U Wear, an organization that provides hope to children and their families who are homeless, abused, abandoned or neglected by providing them with new clothing.

Henri’s numerous honors include being named in 1988 as one of the 12 Most Caring Individuals in America by the Caring Institute, Parents Magazine’s Humanitarian of the Year, and the Orlando Sentinel’s Floridian of the Year in 1994. On June 13, 1997, Henri received an honorary doctorate of Humane Letters from the University of Cincinnati. He has twice been invited to carry the Olympic Torch.

Henri’s life and the story of Give Kids The World are chronicled in his book, Gift of Life, which was published in 1996.