"How wonderful it is that nobody need wait a single moment before starting to improve the world." - Anne Frank

As President and CEO of Give Kids The World, Pamela Landwirth lives those words every day - inspiring  a committed family of staff, volunteers and donors that make the Village possible.

Pamela has been part of Give Kids The World since 1992, and was chosen to lead the Village in 1995. As President and CEO, she is responsible for the operations of the Village and all strategic advancement initiatives for the organization.

Prior to joining the Village, Pamela developed an extensive background in resort operations management, human resource development, and project planning from her 16 years with the Walt Disney World Company.

At Disney, she was involved in everything from Casting to park operations to attractions sales. After leaving Disney in 1993, Pamela was a consultant to the President and CEO of Hard Rock Cafe in all areas of human resources, organizational development, and strategic planning. 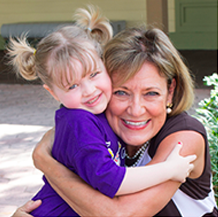 Under Pamela’s leadership, virtually every aspect of the Village has been transformed. The Village more than doubled in size, from 32 acres to 89 acres. The number of villas grew from 56 in 1995 to 166 today.  Eleven new venues and attractions have been added, including Julie’s Safari Theatre, Matthew’s Boundless Playground, the Amberville Train Station and Towne Hall. Volunteer shifts have quadrupled, from 421 to more than 1,600 per week.

But most importantly, the number of families who visit Give Kids The World Village each year has grown from 3,949 in 1995 to more than 7,600 today. Pamela’s dedication to those families is tireless, and she works each day to create for them the happiness that inspires hope.

In addition to her work at the Village, Pamela is a highly sought-after speaker in the nonprofit world.