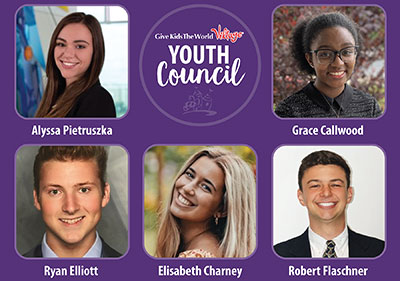 “All of these talented individuals have demonstrated remarkable servant leadership in their communities, and we are thrilled to have them join the Give Kids The World Youth Council as founding members,” said Landwirth. “Their passion and enthusiasm will be invaluable in engaging young leaders nationwide to support our mission of creating the happiness that inspires hope for critically ill children and their families.”

GKTW Village is an 89-acre, whimsical nonprofit resort in Kissimmee, FL, that provides critically ill children and their families with magical weeklong wish vacations at no cost. Tragically, 27,000 children in the U.S. are diagnosed with a critical illness each year, and half of those eligible for a wish choose to visit Central Florida. GKTW is the nonprofit that fulfills these wishes, providing every child and his/her family with an all-inclusive dream vacation. Since 1986, GKTW has spread happiness and hope to more than 176,000 families from all 50 states and 76 countries.

Alyssa Pietruszka, 23, experienced the magic of GKTW in 2001. Diagnosed with a stage three Wilms tumor at the age of three, Pietruszka arrived at the Village as a hospice patient – but her visit changed everything. Upon returning home to Wisconsin, a CT scan revealed that her tumor had shrunk; and against all odds, a few months later, she was declared cancer-free. Since then, Pietruszka has traveled the country as a GKTW Ambassador and devoted time volunteering at the Village. A graduate of the University of Wisconsin-Whitewater with a degree in Marketing and Communications, she currently works as a marketing coordinator for Fresh Midwest. Her many philanthropic activities including serving as a crew captain with Love Your Melon; conducted fundraising for nonprofits including the Ronald McDonald House; and volunteering on behalf of Camp One Step for children battling cancer.

Robert Flaschner, 24, has been giving back and helping to change lives from an early age – including volunteering at GKTW for more than 14 years. Among his many charitable activities, Flaschner served as philanthropy chair for Sigma Nu Fraternity and as a Clemson LIFE mentor for students with disabilities at Clemson University, where he received a Bachelor of Arts degree in Business Management. He has also volunteered on behalf of nonprofits including K9s For Warriors, the PGA TOUR’s Birdies for the Brave military outreach program, the Greenville Chamber Foundation and Operation Shower. A graduate of the Disney College Co-Op program, Flaschner is currently the resort assistant manager at the Four Seasons Resort & Residence in Jackson Hole, WY.

Ryan Elliott, 20, is a junior at the University of California, Santa Barbara, where he is majoring in biopsychology and minoring in clinical counseling – with a goal of pursuing a career in pediatric oncology. He serves as vice president of Sigma Chi Fraternity at UCSB, and is the recipient of the Huntsman Cancer Foundation Horizons Leadership Scholarship. Elliott is also past president and founding Board member of the nonprofit National League of Young Men South Coast Chapter. He has volunteered on behalf of nonprofits including the Long Beach Rescue Mission, Ronald McDonald House Children’s Charities, Second Harvest Food Bank, St. Baldrick’s Foundation and Samaritan’s Purse.

Grace Callwood, 16, enjoyed a life-changing visit to Give Kids The World in 2013 during her treatment for stage IV cancer. Shortly after her diagnosis at the age of seven, Callwood founded the nonprofit We Cancerve Movement, Inc., to bring happiness to homeless, sick and foster youth. Since then, she has recruited more than 10,000 young people to volunteer more than 25,000 hours for nonprofits that serve vulnerable children including Ronald McDonald House Children’s Charities, Casey Cares Foundation and GKTW. Callwood is the 2019 World of Children honoree, a 2019 CNN Heroes Young Wonder, and a 2020 Hormel Foods 10 Under 20 Food Hero. She is a sophomore honors student enrolled in the Global Studies International Baccalaureate program at Edgewood High School, with plans to study international law.

Elisabeth Charney, 17, is a senior at Chapel Hill High School, and will begin her freshman year at the University of Wisconsin, Madison in the fall – with plans to study journalism. Charney is a student government senator and a member of the Tigerlink student leadership group, and has volunteered her time as a camp counselor at Camp Robin Hood in New Hampshire – where she was involved with the Camp Robin Hood Gives Back program. She is also the founder and president of the Give Kids The World Club at Chapel Hill High School.

Members of the Give Kids The World Youth Council will assist the nonprofit in creating alumni wish family reunions across the U.S.; serve as catalysts for local fundraising; and help communicate the Village’s mission on social media and during community events.

For the 15th consecutive year, Give Kids The World Village has been honored with Charity Navigator’s prestigious 4-star rating – the highest rating bestowed upon a nonprofit. Less than 1% of all nonprofits in the U.S. have received at least 15 consecutive 4-star evaluations.