A Tale of Two Families: Night of a Million Lights Marks a Magical Homecoming For Wish Families on a Collision Course with Love 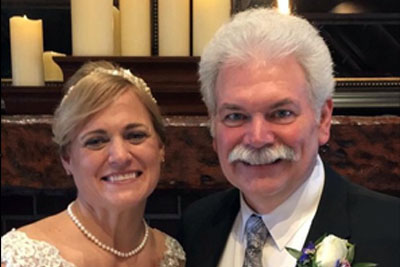 Scheduled to illuminate Give Kids The World Village November 12, 2021 through January 2, 2022, Night of a Million Lights is much more than Central Florida’s brightest new holiday tradition.  For two Michigan wish families, the event marks the culmination of a remarkable love story 24 years in the making – proof positive of the magic that happens every day at the Village, an 89-acre, whimsical nonprofit resort in Kissimmee, FL, that provides critically ill children and their families with life-changing, weeklong wish vacations at no cost.

In December 1996, Kristine Barann’s two-and-a-half-year-old son, Alex, was diagnosed with non-Hodgkin’s lymphoma when a tumor was discovered in his sinus cavity.  After nine months of extensive treatment at Children’s Hospital of Michigan, Alex and his family enjoyed an unforgettable visit to Give Kids The World with the support of The Rainbow Connection.  Alex’s care continued back home, and despite losing the vision in his right eye due to the pressure of the tumor in his sinus cavity, he has been cancer-free since 1998.

Fast forward 20 years, and Kristine, now divorced, connected online with a man named Jim Fleszar who shared a passion for travel and a fierce love of family.  Jim had lost his wife to cancer in 2016, and with his children now grown, had decided to date again.  Kristine and Jim’s first date was spent talking about their children, all very close in age…and the similarities between the two families were uncanny.  Like Alex, Jim’s oldest daughter, Christie, had battled pediatric cancer; both had stayed on the same floor at Children’s Hospital of Michigan around the same time; and both families had visited Give Kids The World through The Rainbow Connection.

Christie’s health journey began in March 1997 when what appeared to be a clogged saliva gland was diagnosed as rhabdomyosarcoma. The tumor growth was aggressive, and the prescribed treatments did little to halt its advancement.  In September, however, the tumor growth slowed, enabling the family to enjoy a memorable visit to Give Kids The World. “This trip was very special to us, because it was the last time that our family of five was able to vacation together,” says Jim.  Near the end of the week, Christie’s condition worsened, and upon returning home, she entered hospice.  Christie passed away on December 28, 1997.  “Christie may have only been on this earth for eight short years, but her awesome life continues to touch us all,” says Jim.

Kristine and Jim’s relationship blossomed, and their “Brady Bunch” became official in April 2019 when they were married.  With Alex having recently gotten married, Kristine and Jim decided to plan a family vacation to Florida and a visit to Give Kids The World in December during Night of a Million Lights. Upon reaching out to the Village to schedule their Welcome Back Family visit, Kristine and Jim were floored to discover that not only had both families stayed at the Village during the very same week in September 1997, the families had stayed side by side in adjoining villas!  From among 166 residential wish family villas at the resort, the Fleszar family stayed in villa 115, and the Baranns in villa 116.  In addition, Alex’s and Christie’s gold stars – which are placed on the ceiling of the Village’s Castle of Miracles in honor of every wish child who has visited – are located just five stars apart from among 176,000 stars.  Kristine and Jim are convinced that their meeting was no mere coincidence.

Jim sums it up with an analogy to working on cross stitch or needlepoint. “When you are working on the stitches and you look at the back, it’s a mess.  The threads are all over the place, and nothing seems to have a rhyme or reason.  It’s only when you look on the other side that you see the intended scene,” he says.  “That is God’s plan for us.  All of these crazy things that happen throughout our lives may not make sense to us, but it’s God’s vision on the other side that is beautiful.  We just have to have faith.”

Kristine and Jim’s love story will come full circle on December 20 when they visit the Village for the first time in 24 years to view Christie’s and Alex’s stars, revisit their original villas, and create new memories during Night of a Million Lights – named by USA TODAY the “Number One Thing To Do In Orlando In December” for 2020.

This year’s Night of a Million Lights event will offer several new attractions, including storytelling tram tours; a 360-degree dancing lights show encompassing 21 fully programmed buildings set to music; a dazzling tree trail; and a holiday marketplace offering festive holiday merchandise and an opportunity for children to meet Santa in his elaborately designed Florida home.  Also new this year, guests can make their visits extra special by purchasing one of a variety of premium packages, ranging from behind-the-scenes guided tours and premium dessert parties to special events and exclusive balcony experiences – providing a stunning setting for marriage proposals, vow renewals, birthday and anniversary celebrations, and special connections like Kristine and Jim’s.